Although Guthe asserted that 300 years of Spanish imperialism had eliminated any memory of pre-colonial society, he often found evidence to the contrary. One clear piece of evidence was the existence of modern graves in some of the caves he excavated. Although some grave included Christian imagery, the placement of these graves in communal burial grounds alongside older graves suggests that those who used these caves were continuing pre-colonial cultural practices. 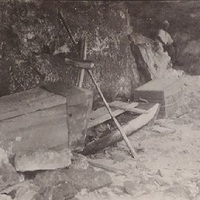