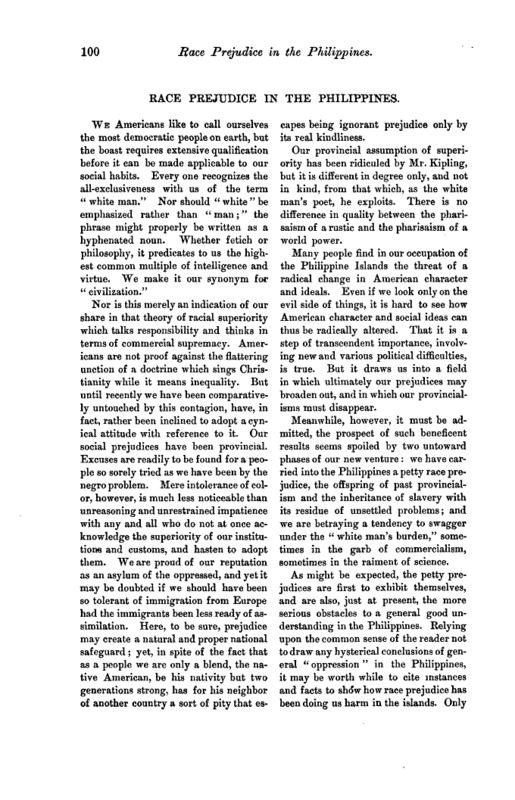 The image above is the first page of the essay that James Leroy published in the Atlantic monthly in 1902. The essay examines the issue of American racism and its relationship to imperialism in the Philippines.

The American concept of race was transferred to the Philippines where the “blackening of the Filipino body” was used to project their docile state, one that paralleled the presumed docility of the Black slave.[1] Ironically, it seemed that colonial leaders were oblivious to their own racializing practices. American soldiers were divided along the south/north lines, echoing the legacy of the Civil War.[2] American writer James A. LeRoy noted that soldiers from the South would be more racist towards the Filipinos in comparison to soldiers from the North.[3] James A. LeRoy graduated from the University of Michigan in 1896 and soon became a political writer whom Worcester quickly recruited to serve as private secretary to the Philippine Commission.[4] LeRoy’s writing earned him high ranks within the US colonial government in the Philippines. In his writing, LeRoy notes the impact of racial biases of Southern American soldiers stationed in the Philippines as compared with those who had come to serve from the north.

In his essay “Policing the Imperial Periphery: Philippine Pacification and the Rise of the US National Security State,” Alfred McCoy argues that the Philippines was a “colonial laboratory.”[5] This notion was exemplified through the works of LeRoy who believed that stationing American soldiers in the Philippines would allow them to get rid of their own racial biases.[6] LeRoy’s idea was that the residue of slavery was a problem that he believed could be solved through the US occupation of the Philippines.[7][8] His take on the role of the white man as colonizer was rather unique: he argued that the white man could attain higher enlightenment through colonizing a brown people, and in doing so, would overcome his internalized racial beliefs.[9]

LeRoy’s hypothesis expected that the US soldiers in the Philippines would overcome their racial prejudices against brown and black people. What he discovered, however, was indeed the opposite. Historian Paul Kramer summarizes the writings of LeRoy and his findings in the Philippines as the following: “America had been a nation in many ways isolated from the rest of the world, and therefore the product of ‘provincialism.’ The result was a variety of disruptive aggression in the Philippines.”[10] Instead of elevating Americans to overcome racism, colonialism in the Philippines only deepened it. LeRoy recounted that US soldiers would shove Filipinos out of the way and shoot “water jugs from the hands of peasants ‘teaching the niggers a lesson.’”[11]

Filipino men were constructed and exhibited as primitive, savage, small, docile and inferior to the white man.[12][13][14] The images taken by Bandholtz, Tomlinson and Worcester and numerous other Michigan Men are often violent and dehumanizing: Filipino men are displayed dead or hung [15] with their hands cuffed [16], barely clothed in relation to their fully clothed American colonizers. Colonizing the Philippines entailed racializing local people so as to create the docile subject incapable of protecting or governing his own land.

5. Alfred W. McCoy, "Policing the Imperial Periphery: Philippine Pacification and the Rise of the US National Security State,” in Alfred W McCoy and Francisco Antonio Scarano, Colonial Crucible: Empire in the Making of the Modern American State (Madison, WI: University of Wisconsin Press, 2009).