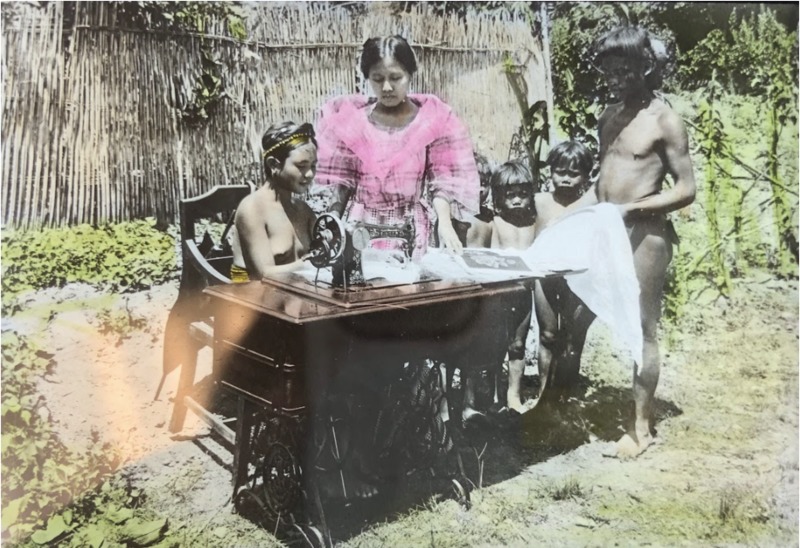 Figure 1: A photo of a young girl "learning to sew."

The newly established US education system in the Philippines expanded the US imperial project. The curriculum was designed to achieve the goals set forth by the US. Educating children presented a unique opportunity for the commission to raise a new generation of Filipinos in the American image.

The early American teachers in the Philippines diverged in their instruction. They were sent to different towns and villages, with varying levels of prior education and resources. The Thomasite (the name given to these early teachers) was required to be adaptable. According to historian Mary Racelis, “There were no courses of study and circulars to guide [them], nor supervisors to advise [them]."[1] The Philippine Commission entrusted teachers to dictate their own curriculum. With a variety of teachers from all different backgrounds, there could be no regulated education or standards of behavior. For example, Frederick G. Behner, a pastor and teacher in the Philippines, taught more biblical lessons than other teachers.[2] Another teacher, Euretta A. Hoyles, who was a University of Michigan alumni and a music lover, spent more time teaching singing than other instructors.[3]

What the Thomasites had in common was their dedication to teaching English. English was the only regulated method of instruction, as it was important for the imperial mission. As Racelis argues, the use of the English language in the classroom “was probably the greatest single factor of unification during the American regime.”[4] The school system was not just a vessel to teach children addition and subtraction, but democratic values. Every aspect of instruction, despite the limited organization of curriculum, was geared towards assimilating Filipino children into American democratic culture. To do this, colonial educators needed to be able to communicate with their pupils. While language opens up understanding and access to worlds, the focus of colonial education early on was on creating a native population fluent in the English language.

The exclusive use of English in schools also created a language barrier for many native-speaking or Spanish-speaking pupils, who were consequently denied the same access to education as their English-speaking peers. Access to education was determined by a student’s willingness to accept the American way of speaking English and living by democratic values.

Thomasites worked to disseminate academic lessons beyond the classroom and into the community. In addition to basic lessons of arithmetic and grammar, teachers organized debate teams, sport leagues, sewing lessons and more. A Thomasite named Walter W. Marquardt documented some of these experiences through photography, depicting boys playing baseball and young girls practicing their sewing.[5] These images demonstrate how the Thomasites understood their mission beyond merely bringing literacy and arithmetic to the Philippines.[6] In Marquardt’s photo (Figure 1), a young girl of the Ifugao tribe practices with a sewing machine, and a woman wearing a blouse and a skirt watches over her. The image represents a stark contrast between the two figures. Teaching sewing was not about providing new technology or skills, but instructing native children and their communities about “proper” ways to dress. The image also served to convey that the indigenous peoples of the Philippines had the potential to evolve into proper colonial subjects. The children watching in the background stand still in line, and another person holds the dress so it does not fall on the ground. The depiction of order, cleanliness, and discipline in this photo communicated that American education was progressing.

Another way Thomasites brought American values to the Philippines was through their country’s favorite pastime: baseball. This uniquely American sport was a cultural phenomenon. The players represented physical strength and honorable, democratic conduct. Fans were trained to cheer for All-American Leagues. Thomasites introduced baseball to replicate American culture. This was a common method used to build relationships in foreign countries.[7] The sport also promoted teamwork and involved the community as players or spectators. While the sport was primarily for men, women were known to participate. Pictured here is a girls’ baseball team dressed in traditionally American uniforms. The girls pictured are Moros (Muslim Filipinos) from the southern part of the Philippines. 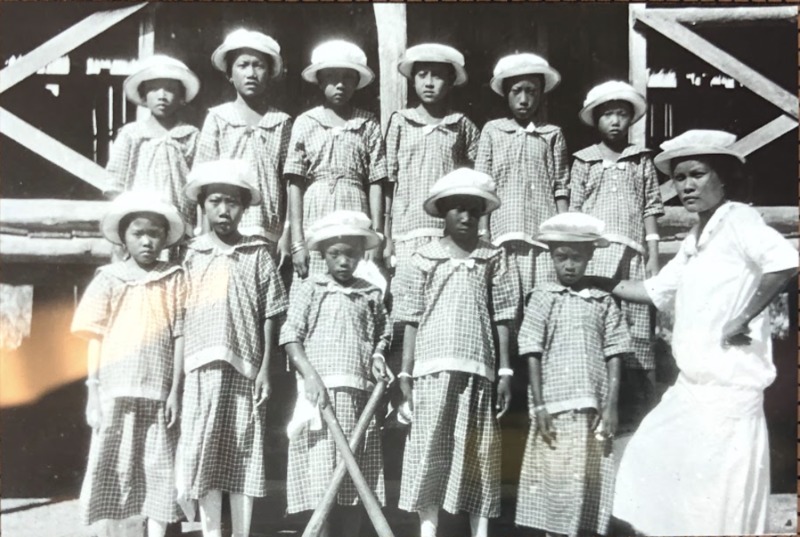 American teachers imposed their cultural values on Filipino children. Euretta A. Hoyles, a Thomasite, explained in a University of Michigan publication how the school day began with American folklore tunes and prayer.[8] Filipino students were encouraged to learn these songs over songs from their own heritage. As a pastor, Frederick G. Behner focused on implementing Christian values into the curriculum.[9] As both images show, Thomasites used photography to capture images of non-Christian Filipinos attaining an American education and values. They focused on indigenous groups such as the Ifugao and the Moro people to convey that US colonial education was able to convert and “civilize” the populations that Spanish colonialism could not.

Fashion was a primary way in which early colonial teachers demonstrated the successes of their lessons. Photographs from the Walter W. Marquardt collection document the evolution of fashion among students in the Thomasite schools.[10] Filipino schoolgirls were encouraged to wear American-made dresses to receive their education. By requiring school children to learn and embody gendered codes of American dress and self-presentation, the US education system asserted power over colonial subjects. Photographing these processes documented their progress over time, and reinforced the importance of US colonial education.

At the end of their service in the Philippines, Thomasites returned to the United States but about one hundred chose to stay. Morton I. Netzorg, a University of Michigan alum, is one example of a teacher who stayed and lived in the Philippines with his American family for many decades before returning to the US. The Netzorg Family, the descendants of Morton Netzorg, have made frequent trips to the Philippines to continue their educational work and visit old friends.[11] Some individual Thomasites chose to integrate themselves into the local culture and develop long-lasting relationships with their students and communities.

The Thomasites were critical to establishing an educational system in the Philippines. Because of the diversity of individual teacher’s backgrounds and lack of standardized curriculum, however, it is difficult to categorize the results of this educational mission, as the instruction for students fluctuated. Many primary schools and high schools that were established during this period still exist today. Nonetheless, the roots of the Thomasite program were founded in the colonial mission to impose American culture and values. The Thomasites have widely been recognized as the precursor to the Peace Corps, whose mission today is to establish similar schools and civic programs across the world.

4. Mary Racelis and Judy Celine A. Ick, Bearers of Benevolence: The Thomasites and Public Education in the Philippines (Pasig City, Philippines: Anvil Pub., 2001), 26.

6. Mary Racelis and Judy Celine A. Ick, Bearers of Benevolence: The Thomasites and Public Education in the Philippines (Pasig City, Philippines: Anvil Pub., 2001), 4.

7. Sayuri Guthrie-Shimizu, Transpacific Field of Dreams: How Baseball Linked the United States and Japan in Peace and War, 2012.