"Michigan Men" in the Philippines 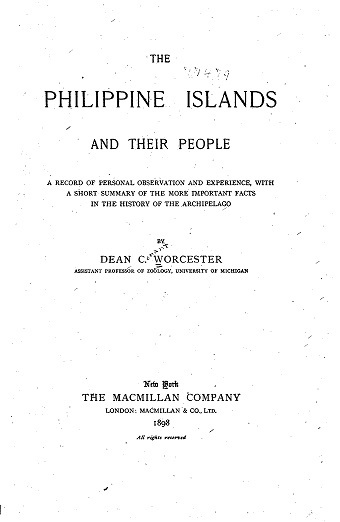 This is an example of one of the texts produced by Dean C. Worcester, one of the Michigan Men who conducted research in the Philippines.

Source: Dean C. Worcester, The Philippine Islands and Their People (New York: The MacMillian Company, 1898), V; The United States and its Territories 1875-1925: The Age of Imperialism, Special Collections, University of Michigan.

American explorers and academics traveled to the Philippines even before the United States colonized the islands. There, they collected and studied zoological, anthropological, and archeological materials. Consequently, American museums became repositories of flora, fauna, pottery, tools, and even skeletons from the Philippines. The museums and archives of the University of Michigan were especially linked to the colonization of the Philippines. Professors Joseph Steere, Dean Worcester, and Carl Guthe each traveled to the Philippines and brought back artifacts and information about the islands and their people. These professors became known as “Michigan Men.” As the three posts in this collection will illustrate, Michigan Men filtered the knowledge they produced through a lens of imperialism. So, while their expeditions to the Philippines were crucial to the growth of museums at the University of Michigan, the archival collections that they produced during their travels reveal the pitfalls of using imperial archives. The first post Carl Eugene Guthe's Expeditions focuses on Guthe's excavations of burial grounds. The second post, Joseph Beal Steere (1842-1940), discusses Steere's collections of flora and fauna from the Philippines. Lastly, the post James LeRoy and Racializing Filipinos examines how the problem of American racism largely shaped how Michigan Men understood their relation to the Philippines.